The Rabbit Back Literature Society, by Pasi Ilmar Jaaskelainen 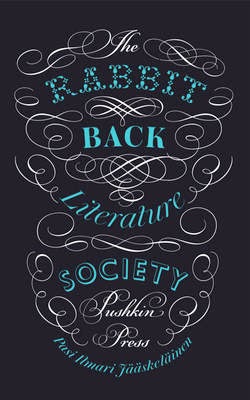 Laura White’s “Creatureville” novels are bestsellers, but what if the mythological beings they feature are based on real beings living in Rabbit Back? Why is the Rabbit Back librarian burning books? And why only now, after so many years, has a new member been invited to join the Rabbit Back Literature Society?

After the end of a disappointing relationship, Ella Amanda Milana has returned to her home town of Rabbit Back and taken on a teaching position in the local school. Everything seems mundane and normal, except perhaps for the part where her father claims he can see gnomes in the garden (but he has Alzheimers, so he’s not an entirely reliable witness), the part where library books are rearranging their stories, and the part where her town is populated by the infamous Rabbit Back Literature Society, an exclusive and rather secretive group of nine acclaimed writers brought together and nurtured from a young age by bestselling children’s author Laura Winter.

And so The Rabbit Back Literature Society is at once a slightly strange and yet fairly regular story of a young woman finding her feet in life. It is peopled with eccentric characters and set in a town with a magical undertow, yet Pasi Ilmari Jaaskelainen makes this seems all perfectly normal. It does come as a surprise to everyone when Laura White, after reading a story Ella has published in the local paper, invites Ella to join the Literature Society, the first new member in something like twenty years. But when Ella is initiated into the group not only does Laura White mysteriously disappear, but Ella is introduced to The Game: a sacred spilling of internal truths. Is this her chance to uncover the Society’s mysteries? Her own mysteries? Can she, or will she, use them to form her own, new future? What will she have to give up in return, and how far will the society go to prevent her from spilling their secrets? Will she wish, afterwards, that she never knew them?

A lot goes on in this book, each new chapter, each new ‘spilling’ in The Game, revealing another level of mystery. There’s not only the mystery of Laura White herself, of the complicated relationships the society members have with each other, but also of the elusive first tenth member and his powerful notebook. Although they never talk about him, this young boy’s notebook has an intense hold over the society, particularly Martti Winter. But is it actually what they remember it to be?

This is a strangely magical book, but the magical aspect of it not only goes unresolved and unexplained, but also never directly mentioned. It simply exists, underlying the thoughts and words and deeds of this small Finnish town. This, of course, makes the whole thing even more magical and interesting. Perhaps I should read some Finnish mythology – perhaps then I would more clearly understand the significance of the Emperor Rat, be able to divine whether Laura White was actually Mother Snow. It’s a wonderful and unusual story, quite dark in places, ultimately both resolving things and leaving much unresolved. Quirky is perhaps one way of describing it, but it doesn’t really come anywhere near; it’s much more fluid than a single description or term can accomplish, much like Laura White, The Game, and the Society themselves.