The Journey Home, by Frann Preston-Gannon 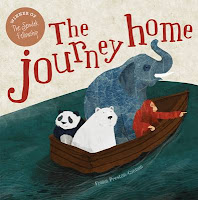 I really loved Frann Preston-Gannon's big, bold illustrations in The Journey Home, but I really, really disliked the story, and thought it was completely inappropriate for a picture book.

“This beautifully illustrated story has a powerful message of conservation,” it says on the back. In actuality, the idea of conservation is not mentioned or conveyed at all, as the storyline is more one of destruction and devastation than one of mending things.

My immediate reaction is that - aside from being really depressing - these are ideas that are too large for toddlers to comprehend. I think children of this age are too young to have such significant issues discussed with them. Toddlerdom is a period of early learning and play and investigation, not a period where they should be told about the woes of world. Of course children should be introduced to environmental issues, just as they should be introduced to science and history and politics, but to do so in a picture book is completely inappropriate. Picture books such as The Journey Home can barely begin to properly convey the real problems of the environment. Simply skirting the edge of the issue, as this book does, is not going to educate anyone. This is not a conservation message; it merely highlights a couple of issues whilst failing to mention any human responsibilities, or the human options to prevent or reduce the issues.

And sending the animals to live with a dodo? Are the animals supposed to be dead? Extinct? Will such young readers understand the concept of an extinct creature and what the dodo represents? While I suppose the book could be used to introduce environmental concepts to older children, for those children it will still be too vague and essentially meaningless because it fails to cover the topics in a serious and realistic manner.