The Wolf Wilder by Katherine Rundell 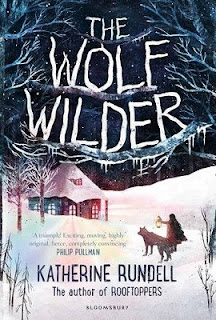 I’ve gotten into the habit of penciling notes in the margins or on the blank pages at the back of the books I'm reading. They could be about anything: an idea or a theme that speaks to me from the story, a particular line that I find meaningful or especially beautiful, a précis of the story to use when I review the book later on. The length and variety of these notes changes book by book, mood by mood. But today, opening my copy of The Wolf Wilder by Katherine Rundell, thinking I’d revisit my reading thoughts before writing a review, I discover the book is untouched, note free. Tabula rasa.

Generally speaking, the more annotated a book is, the more it’s made me think and the more I think of it, but I can only surmise that in the case of The Wolf Wilder I was so busy soaking up the wild atmosphere and the untamed characters and their adventures that all thought of making notes on such things completely fell by the wayside, utterly forgotten in the pure and simple pleasure of reading. Rundell walks a perfectly balanced tightrope with her writing, creating an utterly magical story that simultaneously contains no magic in the fantastical sense – fairies and wands aren’t the magic here, but the wild dreams and actions of a small group of children racing across the winter tundra, led by Feo, her wolves, and her determination.

In a land where wolves are captured from the wild and brought into aristocratic homes to be dressed up and paraded around as pets, Feo and her mother are not wolf tamers, but wolf wilders. Taking in the pampered creatures when the rich houses ultimately reject them – for a snarl or a bite – they help the wolves figure out how to be free again. The woods and the wolves are Feo’s entire life, but when General Rakov and the local army regiment begin to exert corruptive control over the region, and comes after Feo and her mother, everything inevitably changes.

On the run from General Rakov, Feo enters the world outside the all-encompassing forest of her childhood: Russia at the turn of the twentieth century, where people either have everything or nothing, and something more than just fear is brewing beneath the surface. Glimpses of this are shown right from the start of the story through Feo’s friendship with Ilya, a child soldier she encounters in the woods one day, but when they leave the trees, the more they travel, the more apparent it becomes that things are not right. Feo is like a wolf embodied in human form: naturally feisty, she never backs down from a fight, defending her family at all cost, standing up for right and against wrong, so it’s little wonder that her plight to rescue her mother from Rakov’s St. Petersburg prison soon becomes so much more, nor that she unwittingly inspires others to follow her. She doesn’t seem to be afraid of anything, though I think, inside, she’s secretly very afraid, which is impossible not to identify with.

But it’s not just the characters and their actions that make this book. The settings that Rundell conjures are as much a part of the character of the story as the people and the wolves are. From the deep forest of Feo’s home, where everything feels safe and secure until Rakov comes, to the blank snow-covered wildness away from the trees where Feo is running for her life. Then there is the ruined, burnt-out hamlet where a young brother and sister take Feo and Ilya in for the night despite their own practical homelessness. And, towards the denouement of the story, Feo and her band of friends take refuge in a disintegrating castle a little way outside St Petersburg to formulate a plan for entry to the city and then the prison where her mother is being held. The castle is holding together, a surreal opulence interspersed with blackened, burnt-out patches and cracks at the seams that I can’t help but find reflective of the state of the world and city that Feo is venturing into.

It’s hard to avoid comparing Katherine Rundell (who, don’t forget, won the 2014 Waterstones Children’s Book Prize for Rooftoppers) with the master of children’s storytelling, Eva Ibbotson – their writing shares a similar appeal and timelessness and magic, and with heroines and heroes who are good and brave and true. But, to quote Phil Earle recently (on Twitter), her “voice is truly original. And special.” There are moments of fear and darkness in Feo’s story, but equally there are moments of wonder and joy. The Wolf Wilder is a snowy adventure, packed with all sorts of different kinds of bravery and, of course, Rundell’s unspoken magic, and is sure to capture any young reader’s imagination.