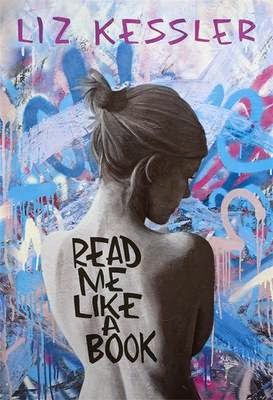 There’s a lot going on in Ash’s life. College, boys, friends. Plus there’s her parents, whose constant arguing and complete inability to have a normal conversation without it turning into a bickering match is pretty much at the forefront of her mind. She’s not much of a ‘study’ girl, more of a mess-around-at-the-back-of-the-classroom girl, and her grades know it. But surely her parents will figure things out, and there’s only a year left of college and if she can just get through it then she can move on to whatever comes next. Except there’s one thing different this year: the new English teacher, Miss Murray, who pulls Ash in and makes her want to do better and makes her think maybe she is worth something after all.

I’ve been looking forward to reading Read Me Like a Book for some time, ever since author Liz Kessler first started to talk about it, over a year ago now. It’s the ultimate coming-of-age story, a book about growing up and figuring out who you are and what your strengths are, and what love is really all about. I’m not sure what I expected, but I knew from its history that it would be interesting. All of Liz Kessler’s previous books are aimed at younger readers, but Read Me Like a Book is a step in a new direction in more than just readership age. She first wrote it over ten years ago, but it was put aside because it was felt that it would be too controversial to publish at the time. Which seems pretty crazy now.

A lot of things start to go wrong for Ash at the start of the story – not only her parents’ relationship, but her relationship with her best friend starts going haywire pretty quickly, and she’s got this new boyfriend, Dylan, who should be perfect in every way, but somehow Ash doesn’t feel right about him. The only person she feels able to connect to is Miss Murray, and as the weeks slip by and she’s struggling to hold all the strands together, the idea of Miss Murray takes greater and greater hold. Ash realises she is in love, and not with Dylan.

I think what stands out for me in this story is the naturalness of it. Being 16, 17, 18, its like boiling point. There are lots of different things going on in Ash’s life and figuring out her sexuality is a major part of that, but everything else is just as real and just as major as well. Who she is in love with is the steering factor in the story, but there are other things too, and this makes the book feel all the more real. It’s not a big showpiece with a dramatic ka-boom moment or a massive reveal; it’s a progression, and that’s what life is really like and I really applaud Liz for writing her story in this way because it works in a way that is different to many other novels that fall within LGBT publishing today.

Ash is a strong young woman who, once she figures out how she feels about things, is able to voice them, with the help of her friends Cat and Robyn. Although she’s understandably nervous and a little anxious about doing so, she isn’t afraid because the environment and the world that she’s coming out to is a more open one than it was twenty years ago, and she knows it’s the right thing for her. What better role model could a young person ask for? The story is full of drama and tension, and this builds over the course of the year in which it takes place, with natural ups and downs along the way, and Ash’s character really grows too. It’s not all roses at the end, but the thing is, it doesn’t feel like an end – it feels like the beginning of a new chapter, in which things can only continue to get better.

If Liz was scared about releasing Read Me Like A Book into the wild, she needn’t be; it’s wonderful. It’s a love story, a growing-up story, a label-free story that should speak to all readers and which says good things about the world and where we are headed. Kudos.