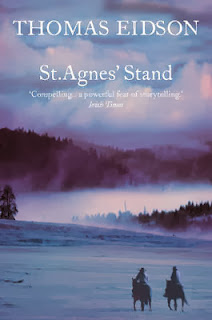 As a bookseller, I read an awful of lot of children’s books, especially young adult titles, and when I do read adult books they tend to be recent releases. This is great, and I read these books because I want to read them, but it does mean that I miss a lot of good stuff that has been around for longer. Like St Agnes’ Stand, a book I most certainly wouldn’t have looked at twice had it not been for a recommendation by my cousin, someone who is so extremely well read that perusing her bookshelves can have the effect of making me feel very small. Ironically, really, my role as a bookseller should be to introduce readers to these rarer, lesser publicized titles, to champion the books that get tucked away into corners, but it’s so easy to become swept up by the marketing machine that I had almost forgotten. So, thank goodness for my cousin C and her fascination, in particular, for the literature of the American West.

Nat Swanson is a young man with a dream: a piece of Californian land. He has the deed in his pocket and a plan in his head, but already things are going awry: in the last town he stopped in, he got into a fight and killed a man. Pursued across the desert by the man’s friends, can he reach California before they catch him? But when he comes across a band of Apache holding up a wagon trail he’s haunted by the face he sees hiding there, and something makes him turn back to help. What he finds is not what he expected: three nuns and seven small children desperate for their lives. For the next five days, Swanson and Sister St Agnes must face their personal demons, overcome loss and injury, and struggle against drought and starvation while the Apaches close in around them.

Thomas Eidson’s language is simple and bold, and he tells his story through a series of different perspectives: Swanson, Sister St Agnes, and the Apache warrior Locan. St Agnes is adamant that God sent Swanson to save them, and she and her companions do seem strangely blessed despite their circumstances, but Swanson is determined – mostly – that it was just chance; chance that he was passing by and chance that made him turn around to help. Locan, however, as Swanson picks off his men, sees this luck as an evil magic created by the strange black-clad women and, while his compatriots wish to cut their losses and leave, he sees that if they follow that path his reputation will be forever lost – the only way to restore it will be to destroy the white man and the black-clad women.

I was a little wary, to begin with, with the depiction of the Apache as a group of blood-lusting warriors who, as St Agnes says, “know no better”. However, I assume that Eidson has based their aspects on historical behaviors by the Apache. What is not explained is exactly why the Apache raided the nuns’ wagon party to begin with. Once things begin to go wrong for them, it becomes a matter of pride and honor for Locan to see things through to their conclusion. That I understand. But what was the original purpose? Just theft?

Of course, all of mankind is entirely capable of carrying out atrocities equal to and worse than Locan and his compatriots. What is frustrating in traditional Westerns is that cultures are frequently painted in a right/wrong, white/black way – white good, everyone else bad. Eidson treads a difficult line here, but his intention is not to dispel such myths, rather to step authentically into the minds and opinions of his characters, the people of the time in which he is writing, and tell a story. This he does with aplomb. Furthermore, although he dabbles in the discussion of God and faith, by telling the majority of this aspect of the story from the mostly agnostic Swanson, Eidson avoids making it into an agenda. It is a deft and accomplished piece of storytelling, and certainly makes me want to read more about this era and/or setting. Cormac McCarthy’s The Border Trilogy has been on my list of must-reads for a while, and I think perhaps it’s time I brought it the top, and I’ll be thinking more about reading and recommending those rarer seeds, books that are as evocative and unusual as St Agnes' Stand.