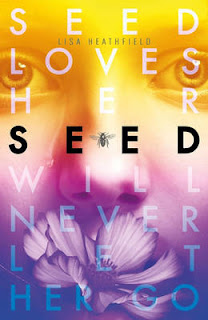 The Oxford English dictionary describes a cult as:


“A system of religious veneration and devotion directed towards a particular figure or object,”

“A relatively small group of people having religious beliefs or practices regarded by others as strange or as imposing excessive control over members.”

The second of these two definitions particularly brings to mind the idea that, most probably, those who are part of a cult aren’t likely to think of their group and/or beliefs as being a ‘cult’ because, today at least, the term ‘cult’ tends to have negative connotations – if you were accused of being in a cult, most people’s instinct would probably be to defend themselves against that concept. If Pearl was told she’d grown up as part of a cult, I’m sure she wouldn’t believe it (although someone might first have to explain to her what a cult is!).

I’ve always found the idea of cults kind of fascinating, so was very much drawn to Seed as a result of that. Why do people form cults, join them, and get pulled into their strange rules and belief systems? How can they believe the sometimes crazy things that some cults invoke, and what would possess them to carry out the acts that some cults require of their members?

Pearl has always lived at Seed. She was born there, grew up there; it is everything she has ever wanted and everything she has ever needed. Seed is her family, her home, her world. She is watched over by Papa S and the Kindreds, who have taught her everything she knows and believes, from harvesting honey and planting crops to the dirty, unhappy, state of the outside world – and, given the state of this outside world, it’s little wonder that there will soon be three new people joining them at Seed: teenaged Ellis, his mother, and his little sister Sophie.

Apart from the slightly strange ritual Pearl has to endure in the opening couple of chapters, at first it seems that to grow up at Seed must surely be a sort of idyll: Pearl and everyone there have to work hard to grow the things they need and to take care of each other, but it seems like a fairly free existence, with few concerns other than day to day life. Inevitably, though, as we are introduced to Pearl’s world, little things are revealed that make the reader question Pearl’s reality. At first these things are as simple and subtle in the story as a little comment or hinted-at off-page action, and it feels as if they are just small things, things that hardly happen and could even be neither here nor there. But then I wondered, what if they happen a lot but Pearl has simply glossed over them? What if, care of her indoctrination, she doesn’t understand how significant they are?

And then, of course, Ellis arrives. He says some strange things, things that only a crazy person could believe – like space travel and humans walking on the moon – and even questioning some of things about mother nature that she has always known to be true. But what if they aren’t? Gradually, Ellis’s presence begins to force Pearl to look at things differently, and the ‘little’ things that felt out of place start to escalate, quickly becoming more obvious, more numerous, and more ominous.

I really liked the nature worship aspect of Seed, but in this case the whole manifesto has clearly been dreamt up by some guy with not-so-pleasant intentions. The plotting is really well paced, gradually revealing things - slowly at first, and then with ever greater speed, all whilst carefully straddling the border between only implying certain aspects of the storyline and life at Seed versus shouting out the details from the rooftops. Pearl’s character development is very realistic too, following a similar pattern to the plot: slowly, slowly at first as it is so hard – almost impossible – to imagine that things could be different from what she has always believed, and then faster and faster as events and her gaining knowledge spirals.

There are a lot of different threads to follow too, which gives the story good substance: not everything hinges upon Ellis’s presence and Pearl’s coming-of-age story arc; there is also the mystery of Sylvia, Elizabeth’s illness, Kate’s erratic behavior. What I would have liked more of is the back story to Seed, and the role of Pearl’s little brother Bobby and his insights could have been developed more. And I didn’t think that Pearl’s voice was particularly distinctive – Lisa Heathfield’s style tends towards the ‘I go here’, ‘I have this feeling’, ‘so and so does this’ which is a little bland. The emotions are very guarded somehow, which makes the drama quite guarded too.

Nonetheless, Seed is a gripping first novel brimming with ideas on freedom and truth and lies, the cult setting allowing her to dabble in the dystopian form in a different way whilst simultaneously avoiding the typical dystopian categorization and idea rehashing. Everything seems innocent on the surface, but what are Pearl and those at Seed – her siblings especially – being told just to keep them in line? How far will Papa S go to keep control of his family and what consequences will this have on the person whom Pearl is to grow into?