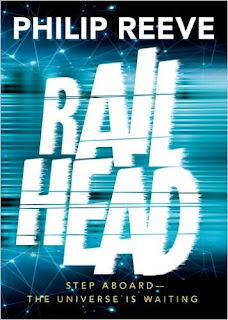 Anyone looking for an awesome new sci-fi novel to read, look no further. Railhead is the one. And even if you're not looking for sci-fi, you should still read Railhead...

Welcome to the future. A world brimming with technology, running on data networks, androids ('motoriks') and bioengineering; a galaxy of planets watched over by god-like A.I.s, tasked by Old Earth to look after humanity. A place where K-Gates and network rail speed you across the galaxy in a matter of minutes, on trains that sing and talk and think and feel.

Zen Starling is a railhead: he loves to ride the trains, station to station, planet to planet. He’s just a petty thief, a nobody really, so why is he suddenly being followed? Who's after him and what do they want? Taken onto a part of the network he never knew existed, Zen meets Raven, an enigmatic figure who gives Zen a job: steal a small box from the ruling family’s luxury, high security train.

But – of course – things don’t exactly go according to plan. From the preparations for the heist, entrance onto the train, and the explosive consequences – in more ways than one – Zen is about to uncover a lot more than he bargained for. What's in the box? Who is Raven? Who can be trusted?

This book is brilliant. I mean, sentient trains, anyone? What else do you need? Every train has its own character and its own foibles, and Philip Reeve’s world-building is exceptional – there is so much to discover, for us and for Zen, and it all fits together perfectly. I don’t want to say too much about the story – much better to discover it for yourself – suffice to say there are plenty of different elements to get your teeth into. The set-up reminded me a little bit of Joss Whedon’s Firefly, a government spread across the planets, the different layers of citizen, but Railhead is much more sci-fi and much less Western than Firefly.

Once there was a boy, Raven tells us… We all like to know the truth, but what if, this time, the truth will destroy us?

I loved Railhead. In fact, I think I might go and read it again. 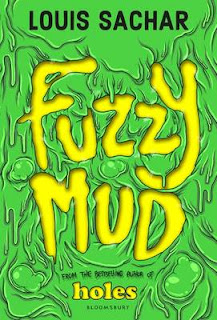 Seventh grader Marshall and fifth grader Tamaya live on the same road and go to the same school and Marshall, as the older of the two, is responsible for walking Tamaya home. Tamaya is uncomfortable about not sticking to the rules and not telling the truth, so when Marshall suddenly decides to take a short cut home through the out-of-bounds woods that border the school property she’s not sure which is worse: entering the woods or walking home alone. But really, what’s the worst that can happen? It’s just a bunch of trees, after all…

And why does Marshall take this sudden deviation from the norm? To avoid Chad, of course. The biggest bully in the school and a kid intent on making Marshall’s life as difficult as possible. Unfortunately, Chad is not so easily deterred, and follows Marshall and Tamaya into the woods.

Fuzzy Mud is the result of a confluence of events: a bully, a trip into the woods, a victim (or two), and an escaped ergie. The ergie is a man-made, single-celled, high-energy, fast-multiplying microorganism. Aka: fuzzy mud. And when Tamaya defends herself from bullying Chad by scooping up a handful of fuzzy mud and flinging it into his face, well, that’s the beginning of everything…

What is the nasty rash Tamaya develops on her hand, and what has happened to Chad?

Fuzzy Mud is – as you’d expect no less from Louis Sachar – completely brilliant, and I loved it. It’s a little bit like Andrew Smith’s Grasshopper Jungle, but for middle grade readers instead of teens – the style is kind of similar, and both books cover the subject of man’s hubris when playing with the natural order of things (in the case, the creation of the ergie). Fuzzy Mud is told using a mixture of techniques, combining reports and interviews with the interchanging stories from Tamaya and Marshall.

What happened at SunRay Farm and how is it linked to Marshall and Tamaya?

Sachar incorporates lots of different themes into this swiftly told tale, from bravery and bullying to what ‘doing the right thing’ means – plus the science, of course. The rime counter included at the start of the chapters adds an extra sense of urgency, as you see how fast things develop, and this feeling is increased by the physical count of the ever-multiplying ergies.

How can they stop the fuzzy mud from spreading? Is it the end of the world?

Marshall and Tamaya are two very different characters but they’re both really easy to like, and the events of the story really bring them both out of their respective shells – lots of lovely character development! This is an excellently written page-turner, and brilliant choice for any young (or older!) readers looking for something just a little bit different.

The Big Lie, by Julie Mayhew 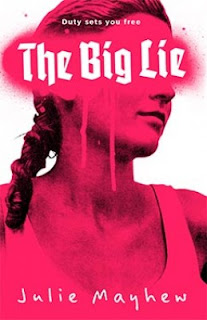 Jessika Keller is a good girl. She knows she is; it’s her duty, after all: to be faithful, to be pure, to be German. She is German and she is British, but it is really only the German part that matters. It is 2014 and she is the 16/17-year-old daughter of a high-ranking official of the Greater German Reich. She is going to be a champion ice skater and her best friend is Clementine Hart.

The title of this book, The Big Lie, references an expression coined by Adolf Hitler in his book Mein Kampf: it is much easier to convince the masses of a big lie than of a small one. Julie Mayhew’s use of the term for the title of her novel seems to allude to the big lie that her fast-forwarded version of the Nazi regime has created: Jessika’s world is one where they are told that they are the best of the best and everyone else, everyone who isn’t pure or doesn’t conform to the ‘government framework’ is untermensch – inferior.

It’s a tough world for us to imagine: no individuality, no freedom of expression. But for Jessika it is everything she knows. That is, until she begins to have feelings that she has no compass for, and until Clementine begins to say things and do things that make no sense to Jessika. Gradually Jess is forced to consider that perhaps there are alternatives to what she knows. We know from the start of The Big Lie that something has changed for Jessika, and as she reveals her story in flashback we discover that there are all sorts of lies – big and small – that being good is not always straightforward, and perhaps the worst thing of all is the lie of omission.

Julie Mayhew has constructed her story really well, from the way she leads us to question why exactly Jess’s father ‘tipped Herr Hart off’ about the house next door being available, how Jessika believes she is helping her friend whilst actually informing on her, and how the Greater German Reich engineers a visit from a US pop star in a way that turns him from being exciting and forbidden to a disappointment. Jessika is an unreliable narrator – she tells us what she chooses to tell us, leading us in one direction, and then revealing that actually there was a whole other part that she left out. How much more has she omitted to tell us? There are all sorts of interesting parallels here between this technique of story telling and the way that the Greater German Reich has indoctrinated her and the rest of the German/British population.

‘Alternate History’ novels and the question of ‘what if the Nazis won the war?’ are certainly not new, but one of the really interesting things about them is that there are so many directions to take – there are basically endless possibilities and endless stories that could be told using this technique. The Big Lie takes a fairly straightforward approach to its tale, but this is nonetheless very effective. I did feel there were maybe one or two questionable plot turns – how does Frau Keller find out about Jess’s dalliance with GG and, after the explosive events of the concert (which bring everything to a head for Jessika), why do they choose to act against Jessika at the strange point in time that they ultimately choose? But these are little things, and perhaps feed into both the bigger atmosphere of ‘big brother is watching you’ and Jess’s semi-unreliable narrative.

There is another really excellent new YA Nazi alternate history book out this autumn, Wolf By Wolf by Ryan Graudin, but it could not be more different to The Big Lie. What I think Julie Mayhew’s novel made me think more of is another novel altogether: Seed by Lisa Heathfield. Seed is the story of Pearl, who grows up in a small community/cult, and I can see a lot of similarities between Pearl’s indoctrination in her community’s rituals and beliefs and Jessika’s – they are simply performed on a different scale.

How many lies has Jessika been told? Perhaps we’ll never know, but as she becomes an expert on zwischenraum – the space in between, like twilight – it certainly gets the reader thinking. She is stuck in this space in between: neither good nor bad, neither liar nor truth teller, neither child nor adult; never quite free. Thank goodness the Nazis did not win the war – but, nevertheless, there are still plenty of places around the world, big and small, where children and adults are conditioned. It is probably even happening on your own doorstep, albeit hopefully to a lesser extreme: what do you believe in that isn’t true? As Mayhew said in an online interview about the book, “We all get subtle messages about race, class and gender as we grow up - messages that often need to be challenged.”