More Than This, by Patrick Ness 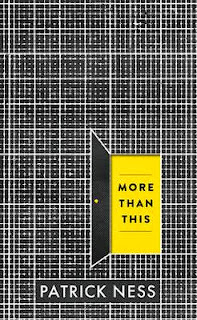 Is it a part of the human condition that we all feel, somehow, that there has to be ‘More Than This’? More than what we have, more than what we know, right now? But if there is more, what is it? Where is it? And what if it’s not at all what we’re expecting?

A boy is dying. He’s drowning, spluttering, gasping; it’s not an easy death. He dies. And then he wakes up. Is this heaven? Hell? Or somewhere else? He’s all alone. Or is he? Everything he thought he knew about the world, about himself, his parents, is about to be brought into focus and questioned. Everything you thought YOU knew about the world, yourself, your parents, is about to be questioned. What if what we think is real, isn’t? What if a choice was made, years ago, that you can’t undo?

When Seth dies, he wakes up in a place both familiar and fathomless. Just when he thinks he is beginning to understand it, a new layer and then a new layer and then a new layer is revealed. Even when you think you know - when Seth thinks he knows - what is going on, you are still left wondering whether it’s the whole truth or just another layer. Patrick Ness plays with this and bends our perception of reality in a multitude of ways, blurring the boundaries of time, of life and death, of the virtual and the real. Although packed with action, he writes in a way that is kind of slow and steady, but instead of drawing away the intensity, it makes it feel as if we’re viewing the story through a glass, darkly, adding texture and another subtle layer of the surreal to Seth’s experiences.

In More Than This, Ness has created a world that is at once explained and unexplained. Is it the future, or is it the now? He simultaneously answers all the questions his writing raises - almost as they pop into my mind – yet without actually really answering them; it’s a book that could be filled with holes, but by the end, none remain. And it’s a book that at first glance is something entirely different from his most popular previous work – The Chaos Walking trilogy – but which quietly nudges its way close to the ideas and techniques used and interpreted in that previous world.

More Than This is surely the most extraordinary book of the year. It is mind boggling, it will strip all speech from your brain. It will make you want to grab hold of Patrick Ness and shake him and ask ‘Why?’ over and over again. But it’s a book that cannot be explained without ruining it - I cannot précis the plot any further, or give you a run-down of the settings or the characters because in order to appreciate its sheer wonder and brilliance you have to experience the unfolding story for yourself. The most important thing that I can tell you about More Than This is that you simply have to read it.

Downside Up, by Hayley Long 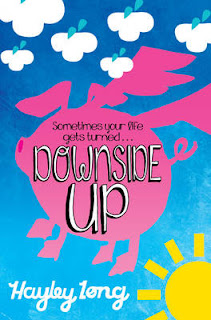 Downside Up by Hayley Long pretty much screams tweenage girl from beginning to end, and is perfect for anyone that liked Catherine Wilkins’ My Best Friend and Other Enemies or Holly Smale’s Geek Girl, from the clever use of word scatterings, thought bubbles, tweets and sarcasm to the completely wondrous fun of getting to read half of the book upside down. Yes, folks, upside down (or should that be downside up?). Ah, the joy of those second takes as people realize your book is the wrong way up, the looks on their faces… priceless.

Ronni’s life has been turned kinda upside down before the story even really begins, since the day that her dad walked out. Ever since, she’s been exerting control by playing up with her mum, staying in bed as long as possible, acting out at school, and generally living in a fantasy land where she’s a mega famous pop star, a world she slips into at will when the real world gets too much to handle. But when Ronni gets a bump on the head, she seems to have been knocked into an alternate reality where she really is a mega famous pop star. A mega famous pop star surrounded by people who are strangely familiar and yet somewhat different… But is being a mega famous pop star all it’s really cracked up to be? Especially when your biggest nemesis is there on the next stage, taunting you, taking over from you…

Hayley Long brings Ronni to life with wonderful clarity, acutely tapping into the pain and emotion of big family issues whilst writing a story that is fun and funny, and seamlessly blending Ronni’s real world with the fantasy one. She is the epitome of the teenage conundrum: she simultaneously wants people to listen to her, but doesn’t actually want to talk (though I don’t think this particular emotional status is actually exclusive to teenagers). Then there is spikey haired Nan to contend with, and Yuri, who is a slightly strange, quite tall, quite thin and quite ordinary looking, but generally invisible Russian boy – isn’t he? So why does he keep turning up? Ronni, though, only has eyes for Stuart – or StuBo - who is generally acknowledged as the best-looking boy in the entire world, if not the entire universe. Isn’t he?

Overall, Downside Up is a brilliantly packaged and cunningly told story that is sure to get the thumbs up by 11-14 year old-ish girls around the country.

The Ocean at the End of the Lane, by Neil Gaiman 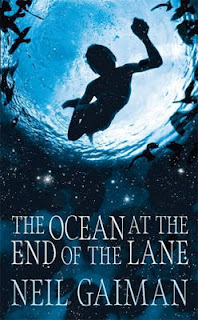 The Ocean at the End of the Lane is such a wonderful book. It’s a book that makes you question worlds and question reality, and yet everything it makes you question feels innately true and real. It’s simple but intense, magical but scary, dark but hopeful. It’s perfect.

It’s been well publicized that the story of Ocean began to form in Neil Gaiman’s mind when he discovered that a lodger in his childhood home had, one night, stolen their car, driven it down the road, and committed suicide inside it. And, essentially, this is where Ocean begins too. When our narrator’s lodger commits this very same act, it opens up a rift, awakens an old sort of evil, and mistakes compounding mistakes brings it into our world. But is it truly evil? What does it want? Can our narrator avoid its clutches? Can they put the world back to rights? And what will be the price to do so?


“I remember my own childhood vividly… I knew terrible things.
But I knew I mustn’t let adults know I knew. It would scare them”
– Maurice Sendak, 1993

This choice of introductory inscription to Ocean speaks volumes, somehow encompassing all that is to follow. Our young narrator is about to learn terrible things about the world. It has the same sort of creep factor that Gaiman created in his earlier book, Coraline – you know that something is terribly, terribly wrong with what is happening, but no-one else seems to notice. Only the Hempstock family, who live on the farm down the lane and on whose ground the ocean lies, can help. They are a family who are as equally unknowable as they make perfect sense. It seems entirely normal - and right - that the strange Hempstock family should exist.

The Ocean at the End of the Lane is beautiful and terrifying and touching and utterly, totally, overwhelming good. Everything is up for question and yet it is hard to pinpoint exactly what I should be questioning. Gaiman writes about a world in which the abnormal, the magical, the mysterious, makes perfect sense. Knowing the origins of the story and the way in which the narrator remains unnamed leads us quietly to question how much of this story is based on reality. But it can’t be – can it? In any other circumstances such a thought would be preposterous, and yet Gaiman’s beautiful evocation of this tale makes it seem not only entirely valid but a completely reasonable possibility.