Wolf By Wolf, by Ryan Graudin 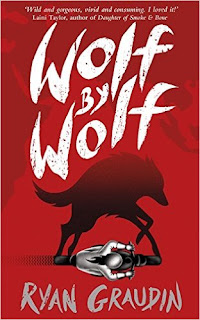 Yael’s story opens in 1944 on a death train, squashed in among five thousand others, no food, no water, for three days. She is six years old. But when she arrives at her destination she will be saved by Dr. Geyer – if you can call it that.

Cut to 1956. Germania, the capital of the Third Reich, where we learn not only that the Nazis won the war, but that Yael has what she calls the ability to skinshift: she can take on any face she chooses, change her appearance at will. And now she is going to use this skill to change the world.

Ryan Graudin sets the scene in the opening chapters of Wolf by Wolf absolutely perfectly: here is a young woman with a terrible past that we can guess at but only guess at, a young woman with an intriguing and unusual twist that makes you immediately engage with her and want to know more – more about what happened to her, and more about what is going to happen. Because Yael, working with the resistance, has been tasked to kill Hitler.

Every year, Germany and Japan hold The Axis Tour, an annual motorcycle race, a grueling, cross-country race for thousands of kilometers, from Germania (aka Berlin) to Tokyo. Only the best riders from Germany and Japan can enter, and only the best rider will win. But what a prize: accolade, yes, but also attendance at the winner’s ball and an audience with the Fuhrer himself, the only time he is ever seen in public these now. Yael’s task is take the place and the face of last year’s winner, Adele Woolfe; to be her, to race as her, and to win.

Wolf by Wolf is absolutely brilliant and massively enjoyable. It basically has everything, interweaving the trials and traumas of the bike race with flashbacks to Yael’s past, revealing the history behind both her special abilities and the five wolf tattoos racing down her arm. The race is not only physically trying but full of emotional and psychological challenges too, from the riders who will play as dirty as they can get to having to evade Adele’s brother Felix and his prying questions, and navigate the unknown history between Adele and fellow racer Luke. Everyone has something to hide and murky motivations and Yael has to make tough choice after tough choice throughout the race. Will she make it? Will she win? What will she lose or have to shed along the way?

It is no longer just about winning the race and doing what she has to do, Yael is also fighting herself and her past and Adele’s past all in one. The only thing that doesn’t change when she skinshifts are the wolf tattoos: they ground her and remind her who she is and what she’s fighting for. Because, if you don’t have your own face any more, what is your identity and how do you hold on to that?

I love the cover of Wolf by Wolf with the overhead view of Yael on her motorbike, their combined shadow taking the form of a wolf. From the tattoos along Yael’s arm to the surname of her doppelganger, wolves are obviously a pretty clear theme through the story. Yael is riding with a pack of biting, arguing wolves in the Axis Tour, yet in some ways she is the wolf in sheep’s clothing, hiding in plain sight, hoping to get access to another wolf’s lair. She knows she should trust no-one, but sometimes that is easier said than done. Because in order to stay human, you have to love, and without trust, how can you love?

Wolf by Wolf is a smart, many-layered thriller that not only kept me right on the edge of my seat, but kept me guessing right up until the final, scary, and completely unexpected twist. An alternate history, a brutal race, a secret mission, with a pinch of sci-fi to set it going – hands down to Ryan Graudin for coming up with something so entirely different.