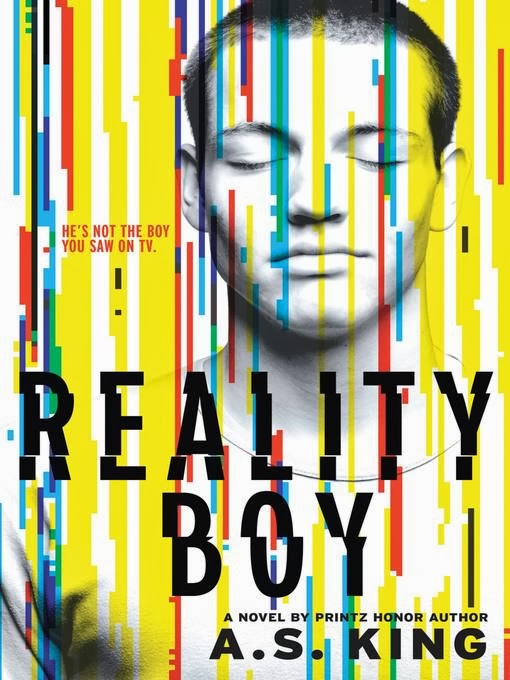 Reality Boy is the story of Gerald. When Gerald was five, his mum wrote to a TV company inviting the Network Nanny to come and work her nanny magic on Gerald and his two sisters.  Five year old Gerald did not respond well to this home invasion. Five year old Gerald’s behaviour took a nose dive, creating a name for himself that would follow him around for at least the rest of his formative years. ‘Formative years’ being the important part of that sentence. It is a not a nickname that should follow any person, particularly not through their formative years.

Today, Gerald spends a lot of time feeling angry. Everyone says he’ll wind up in prison. Everyone expects the worst from him. Problem is, when everyone expects the worst of you, it’s very hard to not fulfill their expectations. And if they only ever see the bad in your actions, what’s the point in even trying to be good? Fortunately Gerald is intelligent enough – much more intelligent than most people he’s surrounded by give him credit for – to see that he is better than other people think he is. The struggle is in trying to get everyone else to acknowledge that. Which is nigh-on impossible when you have a family like Gerald has. His oldest sister Tasha is psychopathic, but everyone (except Gerald, who knows better) pretends that’s she perfectly normal. His other sister got out as soon as she could and hasn’t called since. His mum is in a particular sort of denial that is essentially child abuse, while his dad buries his head in the sand. Oh wait, that would be alcohol-infused sand.

Gerald needs to find a way out and a way out now if has any hope of becoming a normally functioning adult. Can he move out? Can he run away? Can he wait and apply for college? In the meantime, the only means of escape that Gerald has is into his head. When things get tricky he takes a quick vacation to Gersday. Here the roads are made of candy, he gets to go to Disney World, eat ice cream whenever he wants and – most importantly – not only is there no Tasha, but everyone respects him. But just as the Network Nanny show was not real, neither is Gersday. The Network Nanny show showed only the parts of Gerald’s household that could create a TV sensation, not what was really going on. Gerald wants everyone to realize that five-year-old Gerald, the Gerald that spawned that nickname, isn’t real, but as he spirals his way through the next few weeks, who is the real Gerald? And what, for Gerald, is the real world? Is his reality the one where his sister repeatedly tries to drown him while his mother laughs from the sidelines, the one where the roads are made of candy, the one where he can run away and join the circus?

A. S. King is an exemplary writer and has built in Gerald a painfully sad and frustrated character predominantly surrounded by people who are blinded to the realities of his world. But perhaps Gerald is so wrapped up in his anger and frustration that he’s unable to see the realities of other people’s worlds? King has taken one idea, one concept – the destructiveness and unreality of reality TV – and entwined them into a multi-stranded, multi-conceptual gift of a novel that had me screaming inside over the willful ignorance of Gerald’s family. She effortlessly slips between realities, from Gerald’s ‘now’, to the Network Nanny days, to Gersday, taking us with her and with Gerald one hundred percent of the time. Can he, will he, find a way out? What will the consequences be?

A. S. King is as good as John Green and David Levithan - two writers whose fame in the UK has grown exponentially in the last year - and I really hope her UK sales will grow as fast as theirs have. This will hopefully be helped by the excellent gender-neutral cover that her publishers (Little, Brown and Company) have designed for Reality Boy, a book that is so readable you may forget to eat or sleep. Set your alarm clock to remind you to surface for a taste of your own reality on the odd occasion. But only on the odd occasion.