Penguin in Peril, by Helen Hancocks 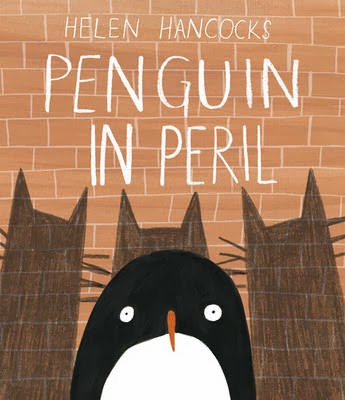 Three hungry cats have hatched a cunning plan to make themselves a fishy feast. Step one: capture a penguin. Step two: recapture the penguin. But finding a runaway penguin on the city streets is easier said than done… Especially when he blends in so well with nuns and policeman and waiters.

To be honest, I am far from taken by Penguin in Peril. I’m not really sure what the author was trying to do (other than be clever) or what the point of the story was (other than the fact that the cats wind up in jail, so get a kind of comeuppance). It was all rather pointless; there's no real sense of characterisation, the drawings aren’t terribly interesting or appealing, and we're never actually let in on the cats’ cunning plan. What exactly were they going to do with the penguin once they caught him? Just get him to catch fish for them? It would have made a lot more sense for them to just spend their money on food in the first place.