The Examined Life, by Stephen Grosz 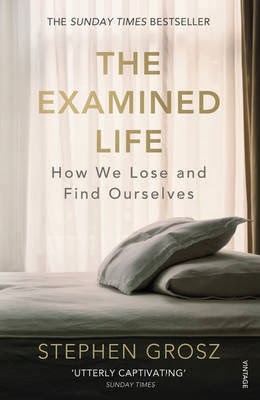 I’m not sure that I believe in psychoanalysis. Or rather, I’m not sure that I believe in what psychoanalysis proclaims it can do (or what I think it proclaims it can do). In The Examined Life, Stephen Grosz manages to both support and refute this prejudice of mine and thus after reading it I remain, inexorably, as much on the fence as I was when I began.

This is not to say that The Examined Life is not a fascinating book. It is. The compilation of twenty five years’ worth of work, patients and thoughts, within its pages are a series of stories about life and how we handle it – and the different ways that different people handle it. The different tales are interesting and the whole makes for quite compulsive reading, particularly as it is very simply written and quite easy to dip in and out of. I see reflections of myself in several of the people within, and take lessons from both them and others.

It is captivating to read these stories of other people, people with behaviours both similar and disparate to my own, but what stands out for me are, predominantly, two things. First, that people spend such an inordinate amount of time on psychoanalysis: four to five hours a week across years and years. Patients can stop attending sessions whenever they like, but if the analyst doesn’t feel they have reached the end of their “work”, the patient is encouraged to remain. The time and money that must be spent on this exercise just seems a little crazy. I fully agree that counseling/therapy is invaluable, and that – much as I might have secretly hoped when I picked up The Examined Life – inbuilt behaviours and thought patterns cannot by any stretch of the imagination be fixed either overnight, or in the reading of a book. Yet five hours a week over three plus years seems a little excessive.

Secondly, the inordinate amount of faith and trust that patients have to put into the person they are talking to. Psychoanalysts may be trained, well-read, intelligent people (or hopefully they are), but at the end of the day the suggestions they are making about the patient’s life are relatively subjective. Obviously they draw on their background knowledge, on case studies, on a general understanding of the human psyche (as far as that goes) to make these analyses, but at the end of the day it is purely their interpretation. Sometimes that is helpful, but how often is it wrong? And, if they are wrong, does this damage a patient’s internal view of themselves even further?

I am thinking in particular of a case Grosz cites in the chapter titled ‘On Bearing Death’, where his patient Lucy has a dream that stands out for her. When she first mentions this dream the session comes to an end and they don’t have time to discuss it, but Grosz tells us that he thought the dream “arose from her unconscious feeling that there was something deadly in her.” Several months later, Lucy reveals her interpretation of the dream. Not only is it the complete the opposite, but it was something she came to with hindsight in the months in between, and something that helped towards her personal healing. If Grosz had given her his initial interpretation immediately after she had the dream, would Lucy have reached this good place or gone in another direction altogether?

Perhaps it’s all irrelevant, I don’t know. The human psyche is a mystery, and everyone is different. I do respect Stephen Grosz though. Not only because he shows times when he has been wrong, when he has struggled, both with his patients and within his own life, but because he writes thoughtfully and respectfully and reveals little hidden secrets here and there about the world and how we humans behave - inbuilt responses that are both good and bad, and that we cannot hope to change until we can see them and acknowledge them, both on a personal and on a societal level. And we nearly always need someone else, someone ‘outside’ to show us such things.

While I got quite wrapped up in The Examined Life whilst I was reading it, always reading for longer than I intended, each time I put it down I felt a little drained; tired of these other people’s lives with their edges of depression. Overall, though, it’s a positive, thought-provoking book. Perhaps it’s better to read it in small pieces instead of large ones, but I am sure that everyone will find a kernel of truth about themselves in at least one of the tales that they then can take away and nurture. And if not, then blimey, you must be the most well-rounded person on the planet; what’s wrong with you?