The Crocodile Who Didn't Like Water, by Gemma Merino 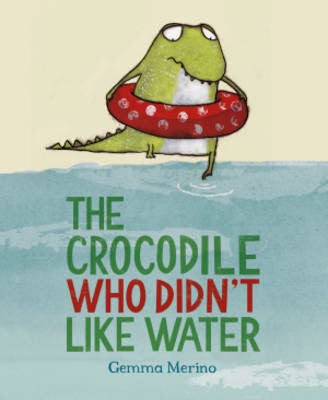 It’s true that our eponymous crocodile doesn’t like the water. He’s not afraid of it, really, he just. Does. Not. Like it. He wishes he did, because he’d really like to join his brothers and sisters in swim club, so he comes up with a plan to get himself in the water. It’s a good plan, but he’s still not terribly happy about being in the water, no matter how hard he tries to like it. But maybe there’s a reason why he doesn’t like the water… maybe he’s not a crocodile at all…

The Crocodile Who Didn't Like Water is a lovely story that says it’s good to try and overcome your fears, but ultimately it’s ok to be different. That it’s more than fine to say, ‘you know what, this thing and me just don’t mix’ - and this usually this means I can do different things instead. Which is exactly what the little crocodile in this story figures out.

Gemma Merino’s illustrations are very endearing – you just want to give the crocodile a hug and tell him everything will be ok – and the twist in the story is so wonderfully unexpected I laughed out loud the first time I read it. Of all the books on the Waterstones Children’s Book Prize 2014 shortlist, I think this is my favourite.