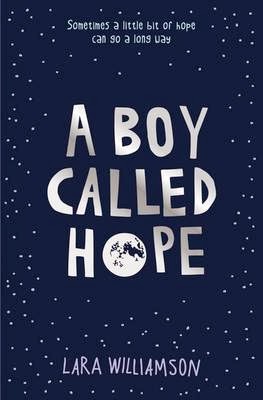 A Boy Called Hope is a really lovely family story that is smart, funny, warm and, of course, full of hope. It is Dan Hope’s story, following his struggles to track down his absentee dad, but along the way there are misunderstandings galore, a word ninja, a dog that will eat literally anything, an eco fashion concert thingymajig, dreams forged and broken, family lost and family gained. Lara Williamson’s writing is witty and natural, and she seems to tune in beautifully to this eleven year old boy’s mind and heart, giving clarity to both his emotions and those of the family and friends around him. It’s impossible not to be drawn into the story and root for a happy ending.

Dan Hope’s dad left four years ago; he, his mum, and his big sister Ninja Grace haven’t seen hide nor hair of him since. Until he turns up on their T.V. one evening. Dan has a mental list of wishes, including not only to become the youngest person to land on the moon and for Grace to move to the North Pole, but also for his dad to love him.  So when Dan’s dad shows up on the TV, Dan launches Operation Baskerville (aka Operation Meeting Dad). From emailing him and tracking down his new house to posing as a work experience student at the T.V. company, Dan will try anything to talk to his dad. But what if his father doesn’t want to be found? What will Dan do then?

Fortunately, Dan has plenty of people on his side: his best friend Jo, new friend Christopher, mum’s boyfriend Big Dave. His sister is looking out for him too in her own unique, angry way – because, of course, she’s been hurt pretty bad by their dad too. And they’re both trying to look out for their mum. Dan is pretty adept at making ten out of two plus two, so jumps to all sorts of conclusions during the story – like why Big Dave has a tattoo saying “Caroline 1973” on his arm and why there’s a pregnancy test in the bathroom waste bin. He never gives up hope, though, never giving up, like when he and Christopher get into a fight, or when he hears nothing from his dad.

Both the story and Lara Williamson’s writing are very engaging, laugh out loud funny in places and heartbreaking in others. There’s a bit of a shock with one of the characters at the end, which really surprised me because I’m not sure it entirely fits with the direction of the story up until that point, but (a) that’s life isn’t it? And (b) I can see that it was a good way to enable Dan to sort things out and for Williamson to draw the book to a close in a way that allows Dan to reach an emotional equilibrium.

A Boy Called Hope was a really lovely read, and a great book for the 9-12 (“middle grade”) bracket. I will definitely be looking out for her next book in 2015, The Boy Who Sailed the Ocean in an Armchair, which sounds like it’ll hit all the same marks as her debut.

Email ThisBlogThis!Share to TwitterShare to FacebookShare to Pinterest
Labels: A Boy Called Hope, fiction 9-12, Lara Williamson, The Boy Who Sailed the Ocean in an Armchair