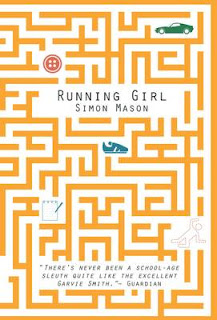 Generally speaking, I don’t normally pick up crime/detective books, but right from the get-go Running Girl seemed like it would be something a little different: its unusual puzzle of a cover, its unusual main character, and its shortlisting for the Costa Children’s Book Award were all big ticks, in addition to which, everything I’ve read from David Fickling Books recently has been really excellent. So I thought, why not?

The ‘running girl’ of the title is Chloe Dow, athletic and beautiful, the girl everyone at school watches. And now: dead. Who killed her, and why? What exactly was she involved in, and what was she doing in the hours that led up to her death?

Garvie Smith, one of Chloe’s ex-boyfriends, doesn’t exactly want to get involved, but he can’t help but try and make sense of things, to add the pieces of the puzzle together, and when he can’t make them fit, he can’t help but try and figure out why. He’s smart but lazy, failing school despite having the highest IQ of anyone there, consistently unmotivated and seemingly unmotivatable, except when it comes to this case, and even as he gets pulled further and further into a world he doesn’t really want to be a part of, and even as both his mother and DI Singh, the inspector in charge of Chloe’s case, get increasingly frustrated with him, he’s unable to leave it alone.

Several reviews of Running Girl that I’ve read have said how unlikeable they found Garvie, but I didn’t have that experience. Frustrating at times, yes; a very different sort of person to me, yes; but at heart he’s a good kid, just bored by pretty much everything except this case. The story is told partly from a mix of Garvie’s perspective, police interviews, and DI Singh’s perspective, which I think gives the book more layers and depth than you’d perhaps get if it was all Garvie’s story (although I will say I think it went on just a little too long for me, Simon Mason adding in an extra level of plot twist that I’m not sure was really needed).

Running Girl also feels very different to a lot of YA that’s currently being produced and definitely stands out from the crowd, not only thanks to the excellent cover, intriguing premise, and characterful protagonist, but because it has a very grown up feel and could sit on an adult fiction shelf just as comfortably as on a YA one. Plus it’s refreshing to have both a lead and a supporting character who don’t fall into the stereotypical white, Christian, middle class (Garvie is black; DI Singh is Sikh) – and, perhaps even more importantly, without the story being anything at all to do with these parts of the characters, these aspects being just one part of who they are, but not determining the plotline nor their personal fates.

Are Garvie and Singh destined to clash or will they find an uneasy compromise? Can Garvie persuade Singh to listen to him, and can Singh find a way to bring his team – and his boss – onto his side? And of all the different things that Chloe was dealing with, which one was responsible for her death?