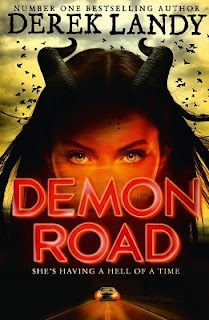 Derek Landy is the ENORMOUSLY popular author of the ENORMOUSLY successful Skulduggery Pleasant series. Demon Road is his first outing into a new fictional world, and it's pretty much guaranteed to be a big hit.

Amber’s life has always been fairly normal. Sure, her parents are pretty odd and wield a surprising amount of power in the community, and sure, they might not show her much love, but she’s always had everything she else she’s ever needed. So it comes as a bit of a shock when she discovers that they’re murderous demons and that – bigger shock – she too has a demon self. But – even bigger shock! – there’s also the part where they want to eat her as part of some power-absorbing ritual. Needless to say, she goes on the run. And boy is it going to be “one hell of a road trip”...

Reviewer ShinraAlpha.com describes Demon Road’s layout/plotting as being episodic in nature – like a T.V. programme – which is so true. It works nicely, adding to the road trip aspect of the book and makes it feel a little like a season of Buffy the Vampire Slayer, albeit with more horns. I loved the Charger (a car with a difference) and Milo (Amber’s protector on the Demon Road) and Milo’s development through the story. And hitchhiker Glen was pretty awesome too. I’m usually pretty rubbish at imagining the accents of characters in books and just give them straightforward English voices when I’m reading, but with Glen his Irish accent really jumped off the page and into my head.

Demon Road absolutely does what it says on the tin and I’m certain that Derek Landy’s die-hard fans will be very happy with the new story and the new story world. There’s a lot going on: Will Amber manage to evade her parents AND the Shining Demon, with whom they made a deal so many years ago? How will she adapt to her demon side? Can we figure out Milo’s big secret? And what about Glen and his own mortal countdown?

Overall, I enjoyed Demon Road and I certainly wanted to find out how things were going to work out, but I think I expected there to be more to it somehow. It doesn’t really do anything more than what it says on the tin and I didn’t find much much subtlety in the writing or the storyline, particularly the language, which in some places – to be brutal – didn’t so much border on the cliché as step right into it, making it a bit hammy horror. I have two thoughts about this, though: (1) Does it really matter? (for most people: no); and (2) Is this the point? Is it deliberate, to make sure the book falls solidly within the conventions of the genre, in a slightly tongue-in-cheek way? (maybe, maybe not)

A couple of the ‘episodes’ dragged for me, and I’m not entirely sure what their purpose was within the greater story other than to add a bit more supernatural stuff. There are parts to them which are relevant to the main storyline, but these particular parts of the story felt slightly unwieldy, or over-egged. I’m sure Landy is more than capable of having done better with this part of the story; instead it feels like he got a bit lazy with it, which I found disappointing – I felt that the ‘furthering’ that was done in here could have been done better and more in line with Amber and Milo’s main mission.

Lastly, there is Amber. For much of the story she felt very two-dimensional to me. Her character does develop some – e.g. from someone whose instinct is to run and hide to someone willing to stand up for a stranger on the street – but I didn’t feel like her development was completely rounded. I spent some time trying to understand what it is about her that quite didn’t hit home for me and I think it’s because we aren’t really introduced to who she is before everything changes for her. We know she was in trouble with her headmistress, we know she had a job in a diner, and we know she had a few online friends, but that’s about it and it’s never fleshed out at all – for me, all of this made her difficult to understand exactly what changes for her as she experiences her new reality.

Secondly, much is made of the fact that Amber’s demon form is considerably more beautiful than her human one. I have mixed thoughts about this. It’s really, really good that Landy has chosen to make our heroine not the standard blonde bombshell but dark haired and a bit on the pudgy side. But why would this aspect of her change when she becomes a demon? The demon part is the stronger, more confident part of her personality and I’m not sure if it’s Landy falling back on some sort of stereotype – that heroines are always beautiful to behold – or if its all a metaphor for the beauty under the skin. I’m just not sure on what his line of thought here is which, in a book of this ilk, suggests that some little thing is missing. In many aspects he makes Amber a brilliant feminist, the sort of person who will stand up for a girl being hassled by a jerk on the street, but it doesn’t always follow through in every part of the story.

All of this said, plaudits must go to Landy for the things he has achieved in the story: It’s fun, has a good bit of gore, plenty of supernatural shenanigans and nicely avoids the YA romance cliché whilst twisting the traditions of both the coming-of-age and road-trip stories. Demon Road is ultimately a cool new YA title that I’ve no doubt will have mass appeal. I’ve also no doubt that a lot of people will disagree with my thoughts here and simply read the book for what it is, without needing anything more. And that’s great. My little quibbles are simply because I think that Landy is capable of more. But: go read it yourself and make your own mind up!