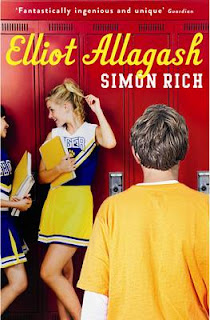 Elliot Allagash is a rich little snob of a boy with a huge God complex and absolutely no moral compass. People bow down to his every need and every whim – and if they don’t… well, you probably don’t want to learn the hard way what the consequences will be. Because: You. Do. Not. Cross. Elliot Allagash.

Seymour Herson, by contrast, is mediocre in every aspect. While his parents may dote on him and pay out for his private school education, Seymour is a serial un-achiever. Until he meets Elliot and Elliot takes him under his wing. Although to say ‘under his wing’ implies there is some sort of caring aspect to their relationship; there isn’t. Elliott is conducting an experiment with Seymour in much the same way that when he was younger he probably tore the wings off butterflies to see what the consequences would be (and, going by how spoilt he is and how inept his father’s parenting skills are, there probably weren’t any consequences). Elliot’s experiment? To make Seymour popular.

Reading Elliot Allagash reminded me a little of the storyline to 1990s film Cruel Intentions, where rich step siblings Kathryn and Sebastian make a bet that Sebastian can/can’t bed goody two-shoes new-girl Annette. Simon Rich’s creation, however, is considerably darker and Elliot plays considerably dirtier. And as Elliot’s games began, at first I took a sick kind of pleasure in them, rooting for the two boys as they took on and manipulated the jocks and the all-stars, wanting the underdog to win. Except, of course, it soon became clear that as long as Elliot Allagash was bankrolling the project, the real underdog would never win.

This a slick piece of writing, drawing me in to Elliot’s world, making me simultaneously dumbfounded and wanting a piece of the action. Elliot has many guns to his arsenal, and the different manipulation techniques he employs veer from clever and artistic to brutal and crass. He truly knows no bounds and, as the story goes on, the term psychopathic comes to mind.

I began by hoping that Seymour can make a friend of Elliot. Even as Elliot announces, “I’m not doing this out of kindness or generosity. I’m doing this purely for sport. It’s an intellectual exercise – a way to occupy my days during this hellish period of my life” (pg. 37), I assumed this was simply a naïve statement, a brush-off, a side comment to deflect the fact that Elliot wants a friend as much as Seymour does… But perhaps Seymour and I should both have taken him a little more at his word? Soon the question becomes: when is Seymour going to wake up and smell the music? And, even as Seymour does begin to emerge from his dream state and begins to lie to Elliot, you know – surely – there can’t be a happy ending? Can there? Because no-one crosses an Allagash.

Filled with brilliant quotes and terrifying tales, the politics of high school writ large, this is a story of power and persuasion and our willingness to see what we want or chose to see, rather than what is actually in front of our eyes. Simon Rich has got to be one of the cleverest satirical writers around. And he’s annoyingly young to boot. Read anything by this guy and you will not be disappointed.