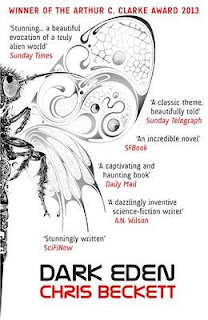 Eden: A planet shrouded in darkness. A colony living in stasis, unquestioningly repeating the annual ceremonies, living by the laws set five generations ago. Waiting for rescue. Waiting for Earth to return, to take them to a home they have never known. When will they come?

This is the world in which John Redlantern has grown up. Nobody questions the status quo. It is what it is. They do what they must to survive, to find food, though it gets harder every day as their numbers grow and their food sources dwindle. But John; John has different ideas. He thinks they should travel across Snowy Dark, explore beyond their safe circle, find out what other secrets Eden hides. But the Family Heads, Oldest and the Council, they live by the teachings of Angela: stay in Circle Valley and wait for Earth to come. This is what they were told and this is what they must do. Otherwise, when Earth comes, they will be left behind.

They have been waiting for 160 years and John, while he dreams of light and Earth just like everybody else does, can’t help but wonder: are they going to come at all? Probably not in his lifetime, he realises. He can’t help but question the laws and the reasoning behind them and, gradually, as his questions go ignored, he is compelled to force change, committing an act so heinous that even after he’s done it he can hardly believe what he has done. An act that causes ripples that become rifts that become chasms in understanding and tolerance, from this action and those that follow, the formerly serene – if hungry – family life is forever changed, changing both Family and himself beyond anything he could have foreseen.

I love the way that Chris Beckett ever so subtly plays with language in Dark Eden, just slightly altering word forms and sentence structure here and there to help enforce the differences in this new world without alienating the reader from the world which we know. And I love the way he plays with his characters, circling around them and Family and Family’s origins before launching John fully onto his path; the way that he makes me want John to do the things he is compelled to do, yet simultaneously creating in John, through these acts and the changes he invokes, a character that you start to question.

Right at the beginning John tells us, “Never mind drowning or starving from lack of food, though. I was going to starve inside my head long before that, or drown in boredom, if I couldn’t make something happen in the world, something different, something more than just this.” (pg. 33) Does he do what he does out of sheer boredom? Later on it seems perhaps that this is so, yet I felt as a reader that the changes were absolutely necessary, especially as John and his new Family come up against the despicable David Redlantern, a truly nasty and hypocritical character I cannot help but hate with all of my soul. Why, when David is the one who introduces the concept of murder and rape to Family, is John the one who gets the blame for it? And why, when David criticizes John for introducing new thought and ideas to Family, is he so eager and willing to incorporate these supposedly hated things into his own new way of organizing Family?

Whichever viewpoint you choose to take, Dark Eden is a fantastic new piece of world building. Winner of the 2013 Arthur C Clarke award; I’m quite excited by rumours of a follow-up. As John’s cousin Jeff says, “We are here. We really are here.” So you better get used to it.