My Friend Nigel, by Jo Hodgkinson 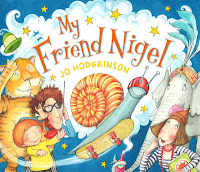 My Friend Nigel tells the story of Billy, his crazy, magic-potion obsessed parents, and a pet snail named Nigel. When Billy finds a snail and adopts him as his friend - the eponymous Nigel - Billy’s parents embark on a campaign to get rid of Nigel by conjuring a variety of other animals for Billy to play with instead: a whale, an elephant, a tiger. Between the animals and the potions, chaos inevitably ensues, but through it all Billy is adamant: Nigel, and only Nigel, is the friend for him.

Personally, I wasn’t much taken with the story. With my ‘adult eyes’ I found it to be a little empty and somewhat contrived, particularly the rhymes, which were quite forced and not always rhythmical. However, while it’s not one for me, I do think this is a book that lots of youngsters - little boys in particular - will surely enjoy immensely. They will enjoy the kiddy humour, the spells-gone-wrong, and the way in which, really, the parents are the irresponsible children. And the overall message is a good one too: its always worth sticking up for your friends.

While as a parent I would get bored of it very quickly - there are many much more sophisticated and clever picture books out there - the enjoyment factor for children is sometimes very different, and I can easily imagine this being a book that is requested time and time again at bedtime.
Posted by Isabel at 06:37