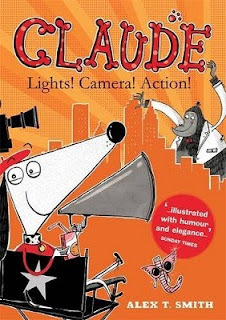 For those who have never met Claude before, he is – as his biographer Alex T. Smith tells us – “A small, plump dog, who wears the snazziest of sweaters and a jaunty red beret.”

Claude is also a small, plump dog who gets up to all sorts of adventurous mischief when the people he lives with (Mr. and Mrs. Shineyshoes) go out for the day. He and his best friend, Sir Bobblysock, that is. Sir Bobblysock is, well, a bobbly sock – Alex T. Smith does like to keep things literal. In this latest story (it doesn’t matter which of the series you start with because each is its own, self-contained tail tale), Claude discovers that a film is being made on his street and ‘accidentally’ gets swept up in the action, from helping out with the make-up to – well, no, I don’t want to give the whole story away...

There is a lot that makes the Claude books special. Among the first to bridge the gap between picture books and chapter books in a whole new way, they are small in size (giving them a grown-up storybook feel) but use pictures on every page just like a picture book does. There’s more text than a picture book, though, giving young readers more of a challenge and more of a story to get their teeth into: the perfect combination for anyone wanting to take the next bookish step, whether it’s for free reading or to be read aloud.

And then there is Smith’s characteristic drawing and unique sense of humour: Claude’s stories are jam packed with little touches that adults can have a good snicker at (such as the local fruit and veg emporium, Miss Melons’ Lovely Pear) as well as the hilarious and slightly ridiculous exploits of Claude and Sir Bobblysock themselves, which children are basically guaranteed to get wrapped up in.

Lights! Camera! Action! is no exception. There is Gorilla who’s scared of heights, a pair of glam movie stars, extraordinary wigs, a jaunty red beret that bears a certain resemblance to Mary Poppins’ carpet bag, and an accident just waiting to happen… Crazy capers all round; read it and weep – with laughter.