The Rest of Us Just Live Here, by Patrick Ness 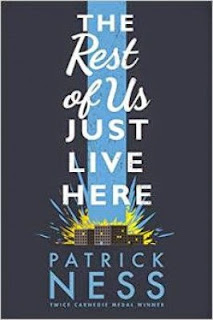 Have you ever wondered how or why it is that the crazy stuff in books and films always happens to the main character? How “coincidental” it is that the person who’s telling the story is the one person in all the world that has the special ability to overthrow the evil despot, or is the mythical hero prophesied about in the ancient texts? I guess it’s because that is the story – but does it have to be? What if the story isn’t the “hero” but someone normal who’s just trying to figure out their own life while all the world-ending stuff is going on in the background?

Because let’s face it, not everyone can be the chosen one. In fact, most of us probably wouldn’t even want to be the chosen one. Even if you’ve got super healing powers, there’s usually quite a lot of blood involved, and that’s before you factor in the weirdness and the monsters. Mikey, for one, is perfectly content not being one of the indie kids. The end of senior year is in sight and his focus is basically on getting there without the school blowing up (again) and whether or not he has the courage to tell Henna he loves her. But: there are many ways in which a world can implode. The question is, can he and his friends avoid the blast radius?

Although it’s really nothing like it, The Rest of Just Live Here strangely reminded me of nineties TV series Buffy the Vampire Slayer. There’s an episode in which Buffy is busy saving the world as usual, but where the story follows Xander, who has been temporarily ousted from proceedings because he keeps getting in the way. Ironically enough he winds up running around town to stop a formerly dead kid from blowing the place up, while in the background Buffy and the rest of the Scooby gang fend of giant hell monsters.

Likewise, there is some fairly odd stuff going down where Mikey lives – strange lights, creepy cops, stampeding deer, the indie kids dying left, right, and centre whilst also encountering the most absolutely true and earth-shattering love of their lives – but this is all background. We get tongue-in-cheek snippets of it at the opening of each chapter, but otherwise only see events as they interfere with Mikey’s entirely normal, everyday existence. Except Mikey is fighting in his own way: an anxiety problem that exhibits in a form of OCD and self-doubt that as graduation rapidly approaches – and all the potential changes that that hails – begins to spiral.

If I was forced to compile a list of my top five authors, Patrick Ness would undoubtedly be in there. The whole premise of this book is fairly brilliant and he absolutely, one hundred and ten percent pulls it off. The world-catastrophe aspect is witty and full of humour – he clearly takes the piss out of several bestselling YA books, but never in a mean way; it’s like an insider joke, a clever ‘wink wink’ to the reader that makes you think, yes, this author gets me.

What he does really, really well, though, is understand Mikey’s anxiety. The way this is presented – especially during a particularly candid discussion Mikey has in the last quarter of the book – makes me feel like Patrick Ness really knows the incipient, needling ways that anxiety works on the mind: that you fear you’re making a fuss over nothing, and how fear of the fear takes over, to the point where the thing you were afraid of in the first place is almost lost amidst the bigger fear of yourself and your perceived failure. This is massive, and massively important. I’ve read plenty of books that talk about anxiety, but none that really get it like Patrick Ness has got it here.

What this all means is that while Mikey might not be fighting to save the world in the same context as the indie kids are, he is trying to save his own particular world. As fissures open around the town, letting the all-powerful Immortals slip through, so the fissures begin to appear in Mikey’s friendships. New guy Nathan is getting in the way – and what is his deal anyway? – Mikey’s feelings for Henna are getting ever more confusing, and his fear that he is the least wanted and least needed of the group looks like it’s about to be proven. How much control does anyone ever have over their own stories? Can Mikey claim – or reclaim – his destiny?

Some authors are very good at writing particular kinds of story; Patrick Ness is very good at writing all sorts of stories: The Rest of Us Just Live Here is as different to More Than This as A Monster Calls was to The Knife of Never Letting Go. It is equal parts insightful and fun. Exactly how he came up with the brilliantly ridiculous names for the various indie kids is anyone’s guess (um, ‘Satchel’?). And did I mention how Mikey’s best friend Jared also happens to be the god of cats? There is plenty of opportunity for metaphor, but as Jared says, “Why does everything have to mean something, though?” Not everyone can be the chosen one and not every book has to say something amazing – although, ironically, by the very act of Patrick Ness saying this, he makes it mean something.

Email ThisBlogThis!Share to TwitterShare to FacebookShare to Pinterest
Labels: Buffy the Vampire Slayer, More Than This, Patrick Ness, teenage fiction, The Rest of Us Just Live Here, YA