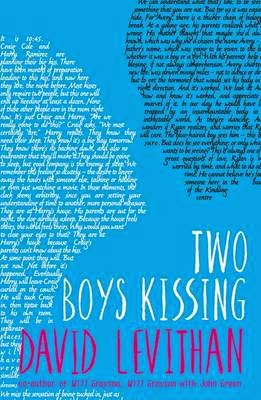 Following the lives of this handful of young men over the course of just one weekend, the centre of Two Boys Kissing revolves around Craig and Harry, who are attempting to break the world record for the longest kiss, and creating quite a storm in the process. Some people are outraged that these two boys should be allowed to do such a thing in public, in front of the high school, but soon enough, they’ve also generated millions of followers on the internet and drawn supporters from all around the world.

Are Craig and Harry the centre? Or is the centre actually the narrator – or narrators? This story is not being told by the boys themselves, but by a group of watchers: the ghosts of the past. They tell the boys’ stories while telling us, quietly and poignantly, their own. At first I found this a bit strange – it took me a few chapters to get used to the juxtaposition of voices and characters, but once I did it made so much sense. Because this way, as the ghostly chorus places their pain against the relative freedoms of LGBT people today, David Levithan reminds me that the rights the LGBT community has today are absolutely brand new.

Things are a long way from being plain sailing, though. Harry’s parents are the ideal: supportive, loving, there. Craig’s parents don’t know anything – what will happen when they find out that he’s kissing a boy in front of everyone? Avery’s parents are true to him, and Peter’s too; Neil’s pretty sure his parents know he’s gay, but they can’t bring themselves to say it out loud, while Tariq is recovering from a brutal, homophobic, physical attack, and Cooper is alone, so alone and lost and ashamed.

These different boys, they are not shaped or controlled or defined by their sexual orientation; each of them is an individual, each has their own temperament and cares and concerns and interests and responses to the world and the people about them. But the way that some people respond to them shuts all of these other things out – Cooper’s father, yahoos on the street, even the radio broadcaster who launches a call-in about Craig and Harry’s record attempt. Is this really the 21st century? I don’t want to believe that there are people who still think like that, and yet I can believe it.

The chorus of voices past enables Levithan to cut away from the individual stories of our eight characters, to look upon the world from a distance, to sum up the pain and the love, to glance at the boys in love, the boys who are alone, the boys are just meeting, the boys whose parents care, and the boys whose parents hate – and then zoom in, down onto the earth and look closely, look inside our selected characters. It’s odd to think of a time when it wasn’t perfectly normal for people to be openly gay. I had forgotten (shamefully) about AIDS and about the terrible struggle that it took to get the disease recognized. And it seems completely crazy to me that it is basically only within my lifetime that any form of gay rights has been acknowledged and – even more crazy – that it’s only within the last couple of years that gay marriage has become legal.

A good friend introduced me to a technique for determining whether I was being sexually discriminated against: ask myself, would this thing have happened, or would this thing have been said if I was a guy? I think the same principal can be applied to all forms of bigotry, LGBT rights included. There is a certain amount of disgust voiced at Craig and Harry as they make their attempt for the longest kiss record – but if it was a man and woman doing it, would the response be the same? We would say it’s sweet; it’s romantic. Just because it’s two boys who are kissing doesn’t change that.

Two Boys Kissing. Yes, this is a book about being gay. The ghostly chorus, the themes, the events that take place all point toward this. But really – really – this is a book about love. Because love is the same. Love is the same whether it’s between a girl and a boy, two boys, two girls. It still feels the same. It still has the power to create and the power to destroy. Love is love, and it cannot be denied.