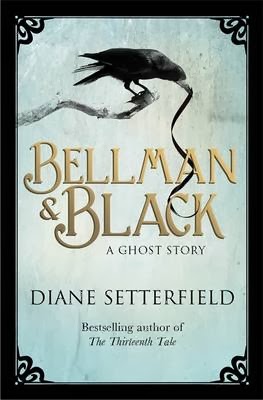 William Bellman is a smart young man, who’s worked hard, taking advantage of opportunities as they present themselves, and built himself a good life. But William Bellman is also a man who easily falls prey to obsession; he can use this to turn a penny or two in business, to dedicate himself to nursing his sick children to health, or to identifying the strange man, dressed all in black, who hovers in the background of every funeral William Bellman has ever attended. And when tragedy strikes, William Bellman’s life is torn asunder, not only by his losses, but by the ensuing conversation he has with a man in a graveyard, a man named – or so Bellman believes – Black.

Who is Black? Was he following William? Will he come back? And what will he want if – when – he does? If only William could remember the finer details of the bargain he is sure that they struck: that Black would save William’s daughter in exchange for William embarking on a new business: the business of death. And as he waits and wonders and frets and worries, Bellman turns his obsession to the realization of the seed that Black has placed in William’s mind: the construction of Bellman & Black, the Mourning Emporium. This, surely this, will be enough to appease Black. But what if it isn’t? What if Bellman & Black isn’t what Black wanted at all?

Diane Setterfield has followed up her extraordinary first novel, the gothic and mysterious The Thirteenth Tale, with quite a strange tale that leaves the reader wondering. She begins her tale with the recounting of a repressed memory from William's childhood: how, whilst demonstrating his prowess with a slingshot, hits and kills a rook in a tree fifty yards yonder across a field. He is repulsed by the act: it was never really his intention to kill the bird; he didn’t think he’d ever actually hit it. So he goes home and outs the memory aside. The rooks, however, we are told, don’t forget so easily. Thus, as we watch William grow into a man, become a husband, a father, an entrepreneur, the rooks are watching him too.

I enjoyed reading Bellman & Black, but I’m just not sure what exactly to make of it. Essentially, it’s the story of a man’s life, the changes, the tragedies and the hope that wend their ways through it, and how a particular event bounces him off onto a different path. As William becomes consumed by his new business, to all intents and purposes shutting out the one thing he loves most – the one for whom he bargained – I couldn’t help but wonder where the Bellman we knew before had gone. But the chapters following Bellman’s life are intersected with snippets from the rooks and ravens: so are the choices Bellman makes his own, or are they influenced by something other? Is Black a rook? Or death itself? Or are the rooks somehow a representation of death? It’s easy, after all, to associate corvids with graveyards.

Rather than fretting over how it all links up, perhaps I shouldn’t try to read too much into it. We make our choices and we live by them. And we die by them. What begins as a tale of a smart and eager young man making good on his meagre beginnings becomes one of tragedy as obsession and loss take their toll. Like I said, it’s a strange book, but no less interesting and no less readable for all that. It’s definitely an interesting choice, especially for readers who are looking for something with gothic undertones, or for something to leave them questioning.