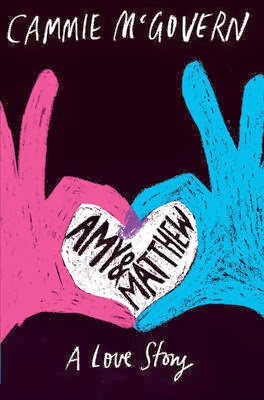 Amy & Matthew was a bit of a surprise. I hadn’t intended to read it when I did, but when it arrived (care of Macmillan books), I picked it up to just read the back and peek at the first page. Three hours later I was still reading.

This is a love story. In many ways it’s a conventional love story, but in many ways it’s very unconventional. And it’s not just a love story: this is a book about being different, about not letting others define who you are or who they think you should be; its about allowing yourself to be challenged in a positive way, and it’s about doing things your own way, even if that includes making mistakes.

Amy has cerebral palsy, which essentially means her body is not hers to do with as she will. She needs help with her fine motor skills, has difficulty walking and difficulty speaking. She’s always had adult aides to help her at school, but now, the year before she’s going to start college, she’s realized something crucial: she has no friends and limited social skills. If she wants to be able to go to college, to live an independent life, that needs to change, and so she persuades her (unwilling) mother to hire other students to help her out during her senior year.

When Matthew finds out he’s been accepted as one of Amy’s aides, he starts to balk. Maybe this wasn’t such a good idea after all. What will he say to her? What if he does something wrong? He’s supposed to introduce her to new people, but he doesn’t really know anyone either. But he sticks it out and finds that spending time with Amy is better and easier than anything he’d ever imagined. And as Amy gets to know Matthew, she discovers he has a different kind of disability - one that is (currently) as restrictive as her own – can she help him?

Amy and Matthew’s relationship is by nature a complicated one; as the months go by they bounce off one another as they challenge each other and are challenged by each other. Matthew is just about the only person who’ll tell it to Amy like it is, while Amy is always aiming for the stars, a distance too far for Matthew to comprehend. I really like that Cammie McGovern writes the story this way: she doesn’t force these characters together; doesn’t seem to write a situation for them that’ll create the perfect happily ever after scenario. Rather, they bounce away and come back, bounce away and come back in the most natural and realistic way possible.

This is a wonderful book. It’s a very engaging read as well as thought provoking. It is not about people with disabilities, it is about people who just happen to have disabilities. Those disabilities do, naturally, have an influence on some parts of the story, but it was mostly an important reminder for me that the mind and the body are separate entities and that we shouldn’t judge a person’s central being based on their physical abilities. Everyone has the same thoughts and fears and dreams and it’s not up to someone else to decide how far another person should be able to go in pursuing them, or in what direction. We can only decide for ourselves.

As far as Amy and Matthew are concerned, I just wanted them to work out how to be happy, whether that was together or apart. Which they did – but I’m not telling you how… Amy & Matthew has everything a good love story needs, but with a double plus because it doesn’t define how we should love, only that we should.


(NB. Amy & Matthew is published under the title Say What You Will in the US)

Email ThisBlogThis!Share to TwitterShare to FacebookShare to Pinterest
Labels: Amy & Matthew, Amy and Matthew, Cammie McGovern, diversity in YA, Say What You Will, teenage fiction, young adult