Half Bad, by Sally Green 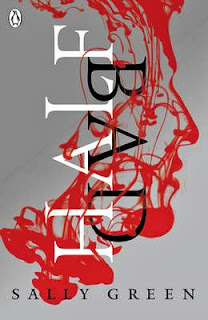 This book, Half Bad by Sally Green, is absolutely brilliant.

Nathan is a witch. A Half Code, to be exact. His father was a Black witch, his mother a White witch. In a country ruled by Whites, where Blacks are not just outsiders, but hunted down and exterminated, to be a Half Code is to be under constant suspicion. Nathan has lived with it all his life: the notifications from the Council of White Witches that arrive throughout his adolescence, progressively restricting his freedoms; the annual assessments to determine the extent of his "Blackness"; the contempt of his oldest half sister.

And now his seventeenth birthday is nearing. It’s imperative that he track down the Black witch Mercury and persuade her to give him three gifts in order that he can receive his Gift. Because without his Gift not only will he never be a fully fledged witch, but in all probability he will die. The problem? The Council have him under lock and key, he doesn’t know where Mercury is, and if he does escape and if he does find her, she may not even help him. The rumour is she eats boys.

Sally Green’s prose is straightforward and gripping, and she adeptly gives us Nathan’s backstory, filling in any questions, building this world and Nathan’s plight, then launching us forward and into his journey. As Nathan learns witch history, we see how the lines between black and white are always blurred; the ones who have the power are the ones who write history, and of course they’ll write it biased towards themselves. ‘White’ persecutes ‘Black’, and they’re persecuting Nathan for being half Black because they fear who he may become – ‘different’ is always feared and the Whites clearly don’t seem to understand the Blacks’ affinity for and connection to nature. Supposedly, the Black are evil, but White seem pretty cruel to me, especially as they gleefully go about committing genocide against the Blacks. Sound familiar?

Half Bad ticks all the boxes whilst being something different. Firstly, it’s a book about witches that, whilst being set in present day England, somehow manages to wrap inside it a bunch of what are traditionally more dystopian themes. And secondly, it’s British – a British author and a British setting – but with the slick feel of an American approach. I don’t mean to disparage British authors, but sometimes British YA books just feel terribly English somehow – I can’t quite put my finger on what the difference is, but here Sally Green makes the best of both worlds by writing a story that doesn’t have that edge of uptightness about it.

I like all the characters, Nathan is really easy to engage with and to get behind and the various relationships Green portrays throughout the book – with his family, his ‘teacher’, the people who help him along the path to finding Mercury, the girl he’s in love with – all felt true. While there is a touch of romance by no means does it dominate the storyline, which is refreshing in this supernatural-type post-Twilight genre. I also particularly liked the importance of blood that Green works into the text. Blood determines whether you are Black or White, blood is a key part of the coming of age ‘Gift’ ritual; blood is power. This is neatly reflected in the clever cover design: swirls of red that resemble blood that take the form of a boy's profile. Nice; this is a book that should appeal equally to boys and girls and the last thing that should happen is for it to be given a girly cover that immediately turns the boys away.

I basically have nothing bad to say about this book. Nathan works out his history, squeezes along the lines of prejudice, tries to find a way to defy the Council. Of one thing he is sure: he will not kill his Black father, and he will not let the Council manipulate him into doing so. But can he stick to this plan when it comes down to it?

Half Bad is going to get a lot of press in the coming months and all of it well deserved: Sally Green is the one to watch in 2014.