The River Singers, by Tom Moorhouse 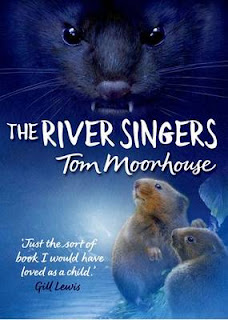 Sylvan, his brother and his two sisters are water voles, river singers, their lives tapped out by the rhythms of the Great River. Sylvan is desperate for adventure, desperate to get out and into the big wild world, and when he steps outside for the first time he’s assailed by new sights and sounds and scents. But the first trip out is also a lesson in the dangers of the world – predators are everywhere and singers must always be alert and careful. This is a warning, too, for what is to come: right from this first trip onto the river bank, there are hints that all is not as it should be in their world – an unusual scent, a missing neighbor, a twist in the river’s song.

So begins the journey of a lifetime for four small voles. When, in the dark of night, tragedy strikes, the singers must make the almost impossible choice to search for a new home. After a dramatic encounter with the treacherous Mistress Valerie that is sure to get youngsters sitting on the edge of their seat, the singers leave their childhoods behind and start to make their way downstream, entering a new world and beginning a new adventure. Through encounters with rats, otters, foxes, mink, and other voles, calm and turbulent waters, will they find a new place for themselves? Will they escape the terror that stalks the riverbank behind them?

The River Singers is being likened by many to Richard Adams' modern classic Watership Down, and I can see where the connections lie, but while it is quite dark and scary in places, The River Singers does not go as far down this route as Watership Down does, forming a comparatively lighter and considerably shorter story that would be perfect for young readers of around 9+. Secondly, a significant undertone in Watership Down is that of human destruction and terror, whilst all the dangers our cute little voles meet in The River Singers are principally sourced from nature. Although, having said that, while the singers never meet humans or come across human constructs, the two main problems the singers face are actually a result of human interference: the introduction to the landscape of American Mink and the reduction of their natural habitat, both of which have contributed to the fact that today the water vole is Britain’s fastest declining wild mammal - as author Tom Moorhouse well knows from his day job at The Wildlife Conservation Research Unit at the University of Oxford.

What Moorehouse has achieved with The Rivers Singers is a wonderful animal tale that quietly explores the interconnection of nature without being in any way, shape or form preachy. I loved the connection Sylvan feels with the Great River, which they name Sinethis – he loves to listen to her song, and it’s almost innately understood that she both gives and takes life, depending on her fickle mood.
Each of the four voles are independent characters, though Sylvan and his brother Orris are perhaps more rounded and easier to interpret than the two girls, feisty as the girls are; and each of the other characters we meet are wonderfully individual as well, from the funny speech forms of Fodur the rat, the playful otter, the paranoia of Mistress Marjoram, the openness of Camilla.

This book is smart and witty and faces the realities of life and death head on but without over-analysing them. A pleasure to read. I can picture the cartoon adaptation now: little voles nibbling on stems and reeds, trekking through the foliage alongside a quiet Sinethis, fighting for the surface in her rapids. Sinethis sings to the singers – but what does she sing?