The Bone Season, by Samantha Shannon 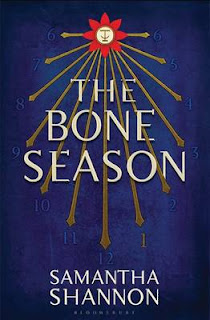 The citadel of SciLon, 2059: a London familiar yet strange; a London controlled by Scion for 200 years, pitting 'unnatural' clairvoyants against normal, amaurotic folk. In this world, being clairvoyant is an everyday occurrence, but it’s also illegal, considered a disease, and if you are voyant you have only two choices: to become a pawn of the state, serving in their army for thirty years prior to compulsory execution, or to disappear into the underground and eek out a criminal life on the streets, hiding your true nature as far as you are able.

Paige is a particularly powerful clairvoyant, and she hides herself within the most powerful of the crime-lord gangs, the Seven Seals. But when she is cornered and captured by the state, everything she thought she knew about her world comes crumbling down: Scion is hiding a bigger secret than anyone could have guessed. In a prison she cannot possibly escape, a person named only by number – XX-59-40 - who can Paige trust?

The Bone Season has a little bit of everything – it’s a bit sci-fi, a bit fantasy, a bit dystopian, a bit mystery. Samantha Shannon has created a complex world both just like  ours and yet unrecognizable. She launches us right into the story and Paige’s life and at times, to begin with, it’s hard to follow all the detail, the terms and the divisions that are simply everyday for Paige, but as her story progresses, things are explained, the puzzles pieced together, and I found myself completely hooked. I was totally intrigued by Arcturus, Paige’s Warden in her new life - the mystery of who he is, who his race, the Rephaim, really are, what his intentions are (and yeah, ok, maybe I have a little crush on him too).

While all the pieces of the puzzle do fit together, I’m left feeling that I’m not sure I fully understand the world of Scion. It might be because there are things Paige doesn’t understand, or because Shannon’s imagination hasn’t been interpreted on paper as clearly as it’s present in her head. Paige is a character I got on with really easily, though I did feel frustrated with her here and there – sometimes she grasps information far quicker than I could as a reader, but at other times she seemed a bit slow on the uptake – for instance, even though it was quite clear from the word go that Arcturus was not like other Rephaim, it took a good 200 pages for Paige to get there. Although, credit where credit is due, this was basically because Paige was blinded by her hate, a perfectly respectable character flaw. However, this uncertainty was exacerbated by the fact that the passage of time was rather unclear – the structure of the storytelling made it seem as if only a couple of days had gone by, that Paige had only had one training session with Arcturus to develop her clairvoyancy powers, but it was then implied that several weeks had actually passed, which slightly threw me.

These are minor things though, and didn't detract from the experience of the book - for, while The Bone Season isn’t always as slick as it could be, it is a great new fantasy. I think it probably asks more questions than it answers, and brings ideas to fantasy writing that I haven’t seen before. The Rephaim dose out plenty of detail about their history, but how much of it should Paige believe? What exactly are the Emim? Who are the Scarred Ones? What is freedom worth? And in the land of Scion, can anyone be truly free?