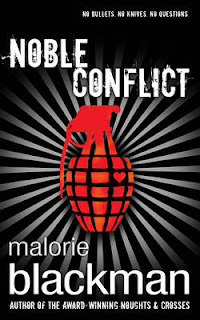 Under what circumstances can a conflict be considered noble? When it’s for a noble and necessary cause? When the ends justify the means? (do the ends ever justify the means?) In Malorie Blackman’s new dystopia novel, Noble Conflict, the government refers to its war as such because they never kill their enemy combatants, only incapacitate them (or do they?).

Kaspar is a newly trained and newly graduated Guardian, a peacekeeper, a protector of the people. The Alliance is stuck in a quagmire of conflict with the Crusaders, terrorists who attack with both stealth and brutality. It’s the Guardians’ job to prevent the Insurgents – Crusader terrorists – from infiltrating society and creating the havoc they seem to love so much. Everyone knows it’s because the Crusaders destroyed their own lands and want to take the Alliance’s lands for their own, but why in their latest infiltrations do they seem intent only on breaking into the computer system and looking at innocuous and out-of-the-way geographical locations?

Noble Conflict starts with a bang, straight into the action and straight into the muddy politics of this world as Kaspar’s graduation ceremony is attacked. It’s a dramatic start to his new career, and drama is certainly something that Kaspar seems to attract. The fact is, he’s just too good at his job – he sees things and questions things that nobody else does and – it soon becomes apparent – things that nobody else is supposed to see or question.

Why did Kaspar’s dead mother leave instructions for him to drink only from the well on his Uncle’s farm? Why do there seem to be two entirely different groups of Insurgents, the phantoms who kill and destroy versus the ninjas, who are more intent on the computer systems? Why does nobody ever try to organize any peace talks? And why do the phantoms only ever seem to go for soft targets? And why does he suddenly have memories - memories that he practically smell and taste - of a place that he’s never been?

At first glance the Alliance doesn’t appear to be typically totalitarian – not to the extent that we see in books like Matched or Delirium, anyway. It seems a comfortable place to live, a prosperous society full of choices, where people live self-determined lives. But as Kaspar begins to peel off the layers, it becomes increasingly apparent how far the Government (‘High Council’) really has extended its web into daily societal life. Kaspar does this not in any standard dystopian search to find some inner truth, but simply as an attempt to understand - to better understand his enemy and thus be a better Guardian.

It is clear from the beginning that Noble Conflict is a dystopian novel and in many ways it’s similar to other dystopia stories – the themes are all essentially the same, let’s face it, and there are plenty of dystopia conventions followed here – but Noble Conflict is different too. It doesn’t follow the path I thought it would: I thought something would happen to make Kaspar question his upbringing outright, that he would get ‘turned’ of a sort, but Blackman has written a story that is much subtler and more of a gradual uncovering. This was enjoyable and fresh, and there is plenty of edge-of-the-seat action and tension, lots of ‘whys’, but it does mean that in some places it took Kaspar quite a long time to reach certain conclusions – conclusions that, to me, were glaringly obvious. However, I think in reality this makes the story more realistic because, actually, I’ve pretty much been trained to see these things (through the piles of other dytsopia novels I've read). Kaspar, though, has never before had to question the reality he’s been presented with, so it’s only natural that it’d take him longer to find his way through. It would never cross his mind, for instance, that the people he interacts with aren’t to be trusted – another interesting twist to the ‘soft’ aspect of the Alliance’s totalitariansim.

Perhaps most interesting is that while I was reading Noble Conflict I also read an article in the Daily Telegraph about Ian McEwan’s new book, Sweet Tooth, where he comments on the use of propaganda by the US government in the 70s to ‘convert’ people to their cause. It made me think: maybe we’re never all that far away from our own version of dystopia, our own version of a totalitarian government. If you’re stuck inside, would you really know it? Especially if choice and freedom is something which is still ostensibly present in everyday life, as it is with the Alliance.

Kaspar is a likeable character, and Blackman’s story trots along with good pace and without any forced elements – it is missing, for instance, the often obligatory heavy romance interwoven within the greater story. And when I say missing, I do not mean lacking. Another article I read recently (sorry, can’t find the source for this one), bemoaned the obsession with many teen writers to include a romance within their pages even when it was completely unnecessary for the story progression. It is great that Malorie Blackman - named yesterday as the Waterstones Children's Laureate for 2013-2014 - has not also fallen into this trap. Don’t get me wrong, there are girls and there is flirtation, but it is a natural part of the story rather than engineered, and does not take over from the bigger themes and the greater focus.

As Kaspar gets drawn progressively deeper into the conspiracies, each apparent truth he uncovers seems to lead simply to more lies. Where does it all end? And what will happen next? A great choice for Waterstones’ Children’s Book of the Month - dystopia is growing up.