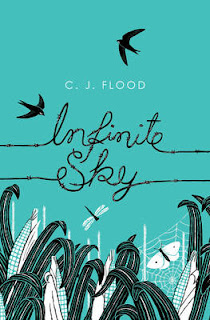 Does it begin when her mum leaves, or is it when the gypsies move into the back field? Does it happen because her brother Sam falls in with a bad crowd, because her dad hates the gypsies, or because she makes friends with them? Is it someone’s fault at all, or is it events just spiraling out of control? Either way, Iris is standing in front of the coffin, and she can’t believe he is dead.

Infinite Sky is the story of one devastating summer, a summer filled with new experiences, both good and bad, but also a summer filled with tension and anger. Iris’s mum has left to ‘find herself’, her dad is lonely and drinks too much, her brother, equally lost, is acting out in every way imaginable. The presence of the gypsies only adds to the tension, especially when Iris is caught sneaking off to meet the young boy living with them.

C J Flood has written a powerful coming of age story that subtly touches on lots of both adolescent and adulthood issues, dealing with them in a quietly thoughtful and considered way. The focus here is not the blush of first romance between Iris and Trick, but rather the dynamics of a family in crisis, how when one small, loose thread is pulled, the whole sweater can unravel before your very eyes. There is much here to applaud, adding another choice to the genre of teen issues that Annabel Pitcher, Jenny Downham and Laura Jarratt are becoming known for.

The story flows, following the peaks and troughs of adolescence, building and building, leading us toward the moment when we figure out who is in the coffin Iris introduced us to in the prologue. It’s emotionally tense, made more so by the fact that the malice both leading up to and following this terrible event is so utterly misconstrued, and the refusal of the adults in the picture to listen and understand what Iris is trying to tell them, to make them see. Gripping.