The Moomins and the Great Flood, by Tove Jansson 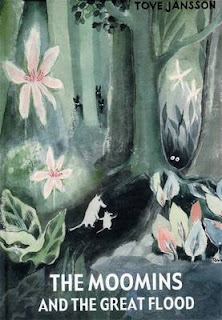 I love the Moomins. LOVE them. My mum read them to me at bedtime when I was a child, and I remember watching the TV series that was on the telly too. I remember Moomintroll, Moominmamma and Moominpappa, the Snork Maiden and Little My and Snuffkin, and I remember just soaking the stories up. I remember loving them, but, funnily, I don’t actually remember that much about the stories themselves. Except, of course, that they were always a little odd – or do I only remember them being odd because my mum tells me so?

The Moomins and the Great Flood is the first Moomin story that Tove Jansson ever had published, and only became available in the UK for the first time late last year. Published by Sort Of Books, it’s a rather beautiful clothbound hardback overflowing with Tove Jansson’s quirky sketches. Reading it is really fascinating, because it’s quite different to the later Moomin stories. The plotline is less developed (and much shorter, of course) than the full novels that were to follow - and the pictures are too, Moomin’s snout is much longer and snoutier, for instance – but the essence of Moominland is here, the array of strange and different creatures and Moomintroll’s brave little personality.

At the beginning of The Great Flood, Moominmamma and Moomintroll are homeless and looking for a nice place to tuck in and hibernate for the winter months. Moominpappa is not on the scene, having wandered off with a bunch of Hattifatteners and apparently gotten lost, but his wife and son are stoically brave and are simply carrying on as if this was the most normal thing in the world to have happened – an interesting reflection of the state of the world at the time this story was written, 1939, when many fathers had gone off or were going off to war and not expected to return. Moominmamma and Moomintroll enter the deepest part of the forest, forging their way onwards in hope of finding a better place.

The events that follow and the creatures they meet are surely a further reflection of the dark clouds and unsurety of the early 1940s – a Great Serpent, an old man who’s built a garden made of sweets and chocolate inside a mountain, the strangely emotionless Hattifatteners. But amid the dense blackness of the forest there is light too: glowworms twinkle, the eyes of a very little creature who will become a friend (and a precursor, I think, to Sniff) look out from between the trees; glowing flowers light their way and then sprout a maiden with long, electric blue hair; and a boy in a lighthouse, looking out for those storm-torn souls who make it to his harbour, invites them in for sea-pudding.

And then the Great Flood of the title descends upon them,

“The water rose ceaselessly, and at last they had to climb up on to a small rock so as not to be snatched away by the current.” (pg. 45).

Whether an allegory for the tide of war and the destruction it leaves in it’s wake, or a religious reference to Noah’s great flood, this provides the opportunity for the Moomins to be stronger still in their quest, to help others despite their rather miniscule stature. Even though the Moomins in this story are clearly very tiny creatures (apparently, they traditionally live behind people’s stoves), they are not cowed by the great events taking place around them, and instead of throwing their hands up in the air and relinquishing control of their lives, they do what they can to soldier on, not only to find their way through the darkness, but to help others along the way. They never fear for their own lives, and when the floodwaters clear, the sun comes out and a happy ending is just over the page.

Email ThisBlogThis!Share to TwitterShare to FacebookShare to Pinterest
Labels: illustrated book, Moomins, Sort Of Books, The Moomins and the Great Flood, Tove Jansson