Mabel and Me, Best of Friends, by Mark Sperring & Sarah Warburton 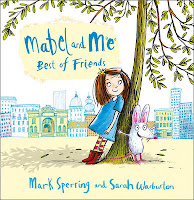 This little book really, really appeals to me. It’s funny and cute and funny and clever and, oh did I mention? Funny.

‘Me’ is a little mouse with remarkably big ears (literally, not metaphorically), and he and his best friend Mabel are taking a stroll through their rather cosmopolitan town. In fact, Me tells Mabel that she is his bestest bestest friend, but Mabel’s response is - in a way that is so typical for a small child - “Why?” which leaves Me a bit stumped for an answer. As they continue on their walk, they encounter some people that make Me forget all about Mabel’s question, but ultimately the events that ensue remind him of one of the reasons why Mabel is his bestest bestest friend...

There’s a little bit of everything in Mabel and Me - a French photographer, a Prima Ballerina, dancing in a “boom-box, tap and jazz kind of way”, a counting page, ice cream, and a noisy photo booth. There are pigeons and pussy cats and a beautiful pond. The story is witty, with language that is both typical and atypical of a picture book. “Flash! click, flash! click, chugga, chugga, chugga,” goes the photo booth, but with words such as ‘diabolically’, ‘bristle’, and ‘extraordinary’, neither do the writers pander or look down upon the reader. In fact the language and the rhythm of the words has a lovely variety, chopping and changing and moving around the page to reflect the activity of the story.

And the pictures do the same: from a street overview with cars and buildings and an old-fashioned postbox in the background, to a closer image where you can peer in the windows of the houses behind (cute kitty alert on this page), to being focused even further on just the prancing photographer. The illustrations are lovely and detailed, full of character and very expressive. They have a slightly old-fashioned feel and a slightly European feel to them, conjuring idyllic yet real parks and streets. And they have a light feeling to them, even as Me gets progressively more riled by the things that people are saying. The dancing page is my favourite - it makes me want to boom-box and tap and jazz my own way down the street.

Mabel is very serene and doesn’t seem to be at all affected by the events of the story, while Me shows off a range of emotions. Rather beautifully though, when he gets very angry he quietly counts to ten until he has suitably composed himself, and then, instead of getting very upset and storming off when Mabel says something he wasn’t expecting, he is able to shake it off and laugh about it.

The End, happily ever after (with ice cream). I hope this is just the beginning of Mabel’s and Me’s adventures.